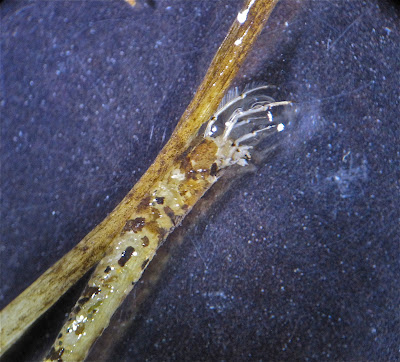 While the Limnephilidae (Northern Case Maker) caddis is the largest caddisfly family in North America, worldwide, the largest number of caddisfly species (1300+) is found in the Leptoceridae family (Long-horned Case Maker).  In this country, six genera account for only 100 species of Leptocerids. (See Thomas Ames, Caddisflies: A Guide to Eastern Species for Anglers and Other Naturalists, p. 190.)

The Leptocerid is, for the most part, a "warm water" caddisfly larva, found in lakes and ponds and large streams and rivers: they prefer habitats with bottom vegetation out of which many of them make their cases.  Thus, it is no surprise that in the data that StreamWatch has assembled over the years, this is a caddis that is primarily found in the Rivanna River itself -- in all of the mainstem sites that are sampled -- sometimes in fairly large numbers (it is, however, on occasion found elsewhere).  Most are found in late spring and mid-summer: this is a larva that hatches from mid-summer through early fall, and during that period, the adult form of this caddis can provide exciting fishing for fly fishermen. 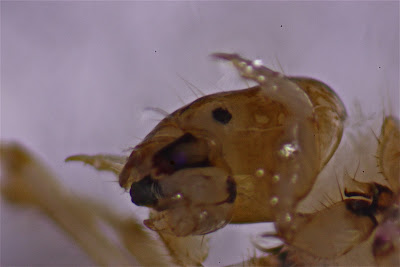 In this photo, the antenna is the clear, spike-like projection that sticks out from the head to the left of the eye (from the viewer's point of view).    There is one other feature that helps us to pick out a larva in this particular family from all other caddisfly families:  the hind legs are quite a bit longer than the front and middle legs.  Have another look at the picture posted at the top of the page.  All three pairs of legs can easily be seen in this photo.

Of the six Leptocerid genera keyed out in Peckarsky, et.al., Freshwater Macroinvertebrates of Northeastern North America, p.114),  I have seen only three, to date, in the samples done in our streams:  Ceraclea, Oecetis, and Nectopsyche.   Unfortunately, I have no photos of Ceraclea.  I've only seen two in the two years that I was with StreamWatch, neither of which is in my reference collection.
I can say that Ceraclea larvae are somewhat unique in this caddisfly family.  The antennae on these larvae are not terribly long:  but in their stead there are two, black, curved lines on either side of the mesonotum (dorsum) that help us with identification.

Oecetis larvae often make cases of pebbles, as in the sample below.  The photos show the larva both in and out of its case. 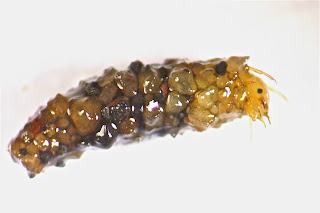 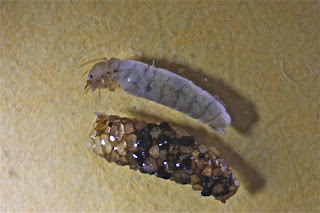 (This larva, by the way, was not found in a large river.  I found this this summer in Lickinghole Creek near Crozet.)    The long maxillary palpae set this genus off from all other members of the Leptoceridae family.   In the photo below, the maxillary palpus is the dark, burnt orange spike sticking out in front of the head of the larva (directly below the antenna). 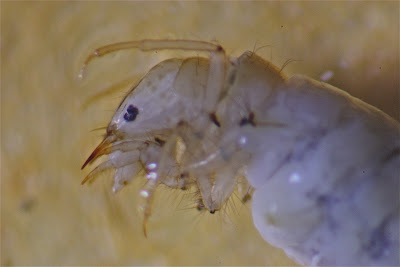 The other Leptocerid genus I've seen in our streams -- Nectopsyche -- is the one that I normally think of when I think of this type of caddis.   The cases are always (almost always?) attached to a sturdy stem of vegetation, one that's longer than the case itself.  Here are two pictures of this easily identified case, one with the caddis inside its case, the other with the caddis outside. 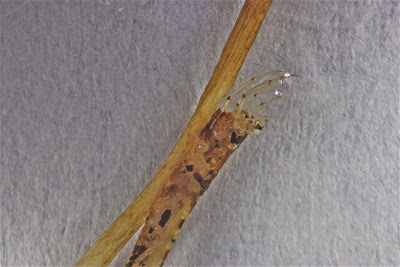 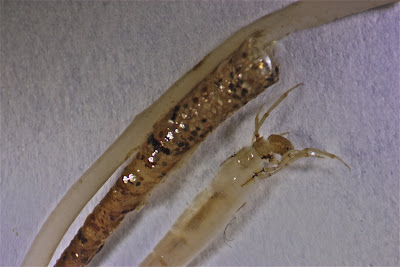 How do we know this particular genus?  Well, the case helps a lot -- though there is another genus (Mystacides) -- that builds a case that could be mistaken for this.   One of the features that helps to identify Nectopsyche are the dark, sclerotized bands that stick down from the orange circles that form the lateral humps (note: the "Long-horned" does have a dorsal and two lateral humps on the first abdominal segment, but they are often not very distinct).   This feature we can see in the photo below. 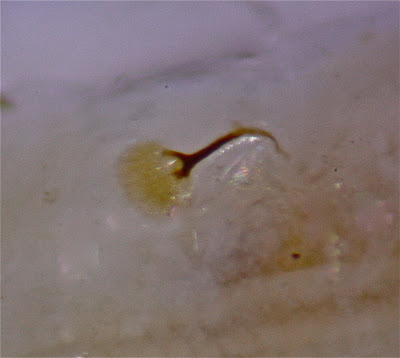